It was all hands on deck today as it was the last day before entering Chile. This meant cleaning the inside of the boat from top to bottom, and eating any fresh produce in the galley to avoid it being confiscated by customs. Other than spending most of the day eating and cleaning, Simon also had the chance to teach me how to use a sextant. This allows us to work out the angle of the sun from the horizon, and work out our position… It’s a bit more complicated than that, but that’s in short what happens… As we are now 150 miles from the Chilean coast, we also saw our first boat of the trip. This allowed me to test out the commercial radar installed on the boat, allowing me to track, and gather information on the other boat. In the evening once the boat was clean, and we had done everything we could do until port, we managed to squeeze in a bit of fishing, without Peter seeing. 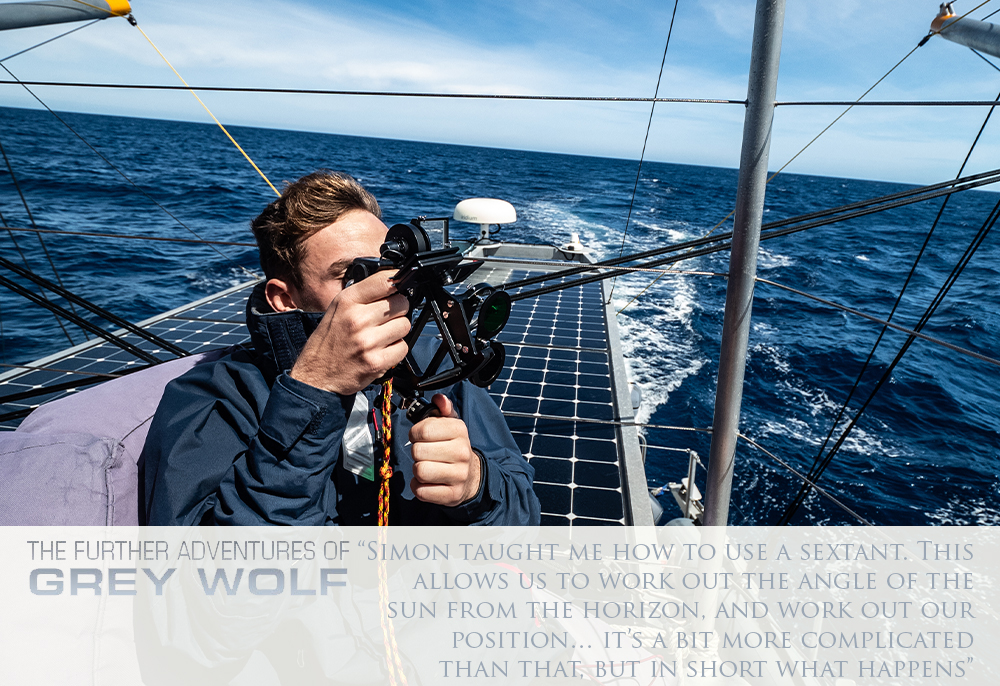 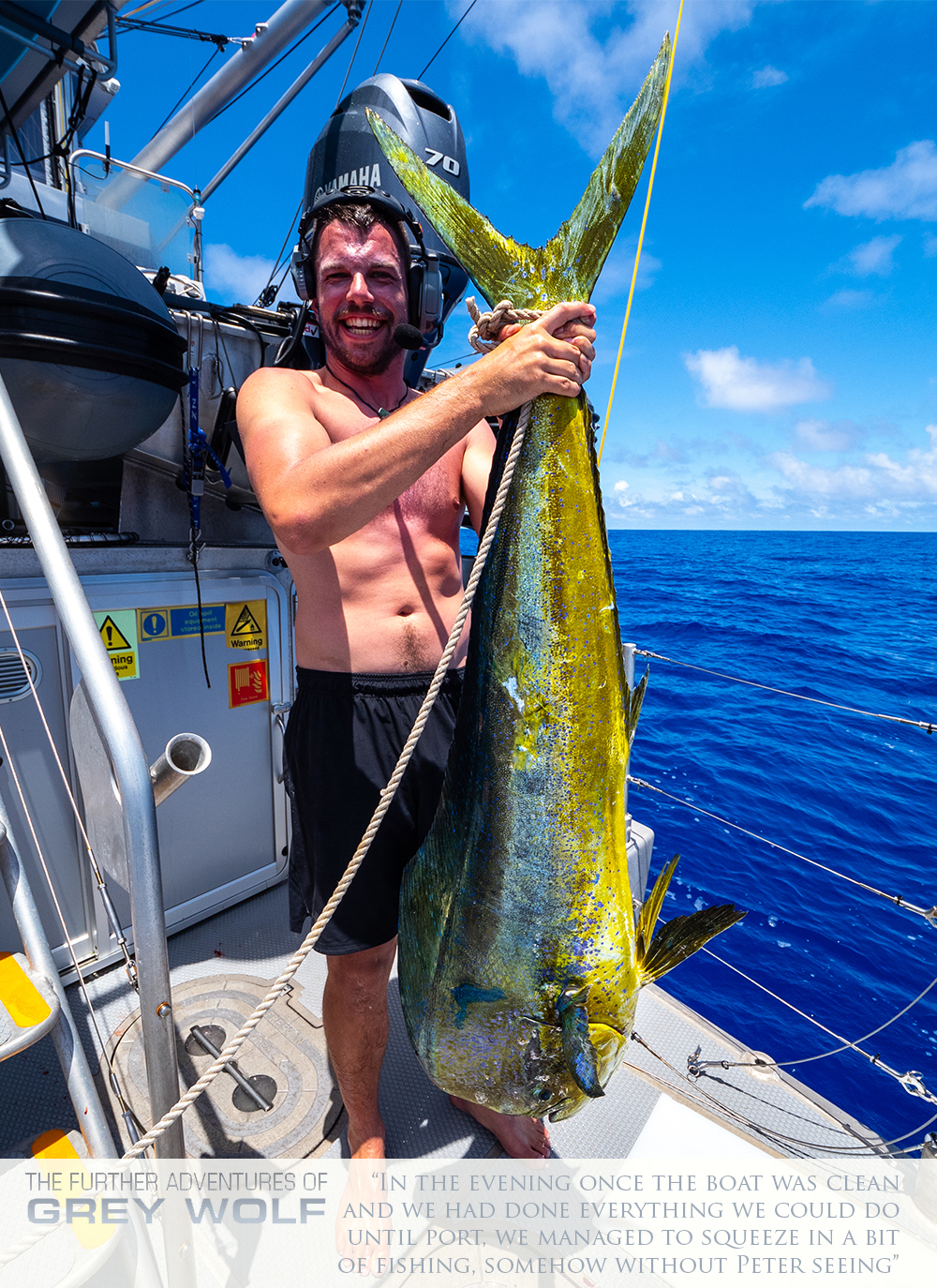 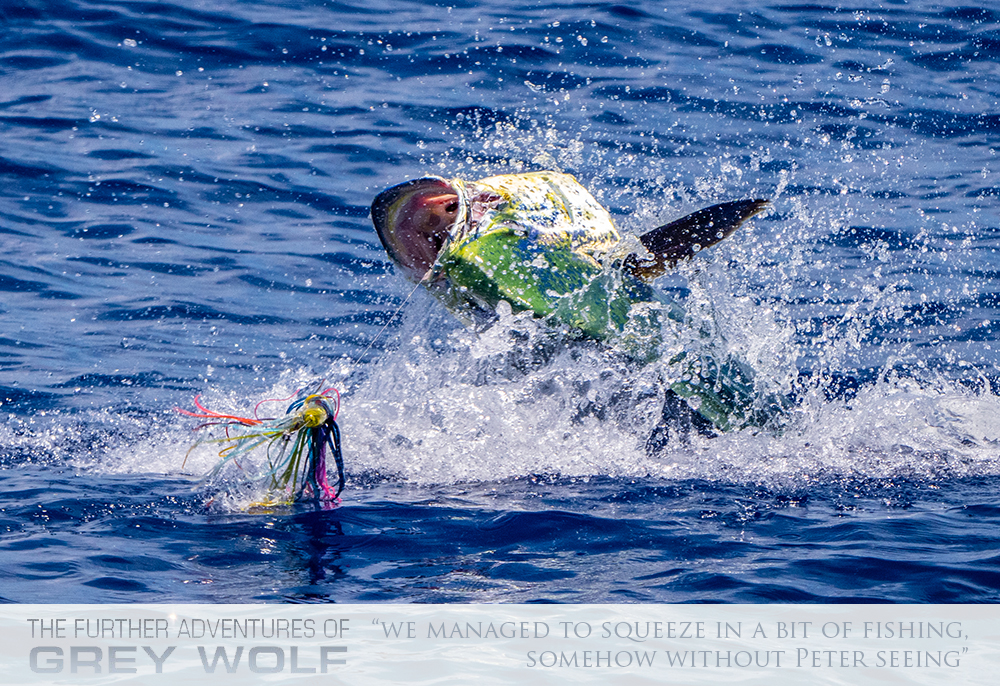 So today we were up early around 5:00am for the final run into Chile. We had to navigate through some choppy waters created by the shallower water and the sandbanks. We then had to navigate through the fjord that was a highway for small fishing boats, ferries and fishing buoys. This is where the commercial radar came in handy, which enabled us to distinguish between dangerous and safe targets. As Grey Wolf is not your average pleasure yacht, it attracts quite a lot of attention, as we found out when the Chilean Armada did a couple of low flying passes over the boat to have a look. We had 6 hours of navigating through the channel before we reached harbour. The channel was amazing for wildlife, throughout the crossing we spotted a penguin, a dolphin, many seals and an amazing amount of birds. When we reached Puerto Montt we had to wait for a pilot to come on board and guide us through an even smaller channel and into the marina, because for foreign vessels over 50T it was compulsory. Once we were finally alongside, and we had cleared customs, we went into the local town for dinner and some much-needed drinks. 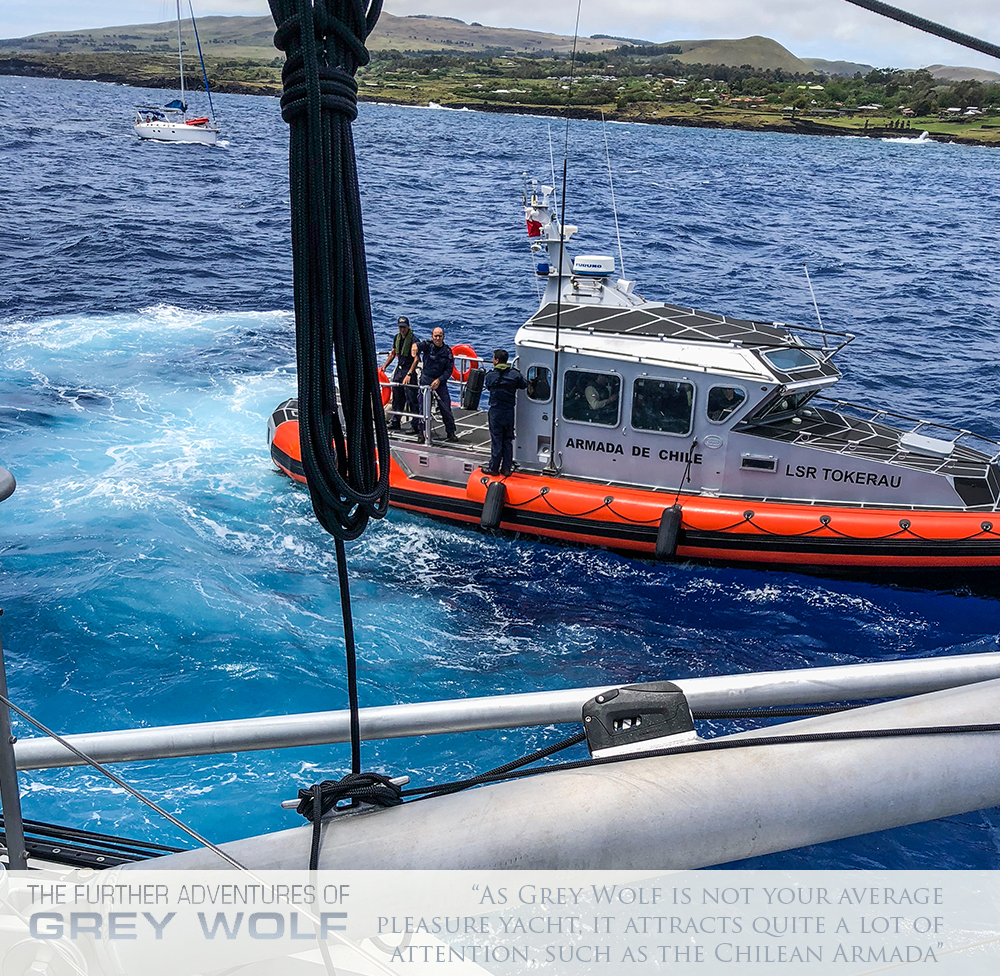 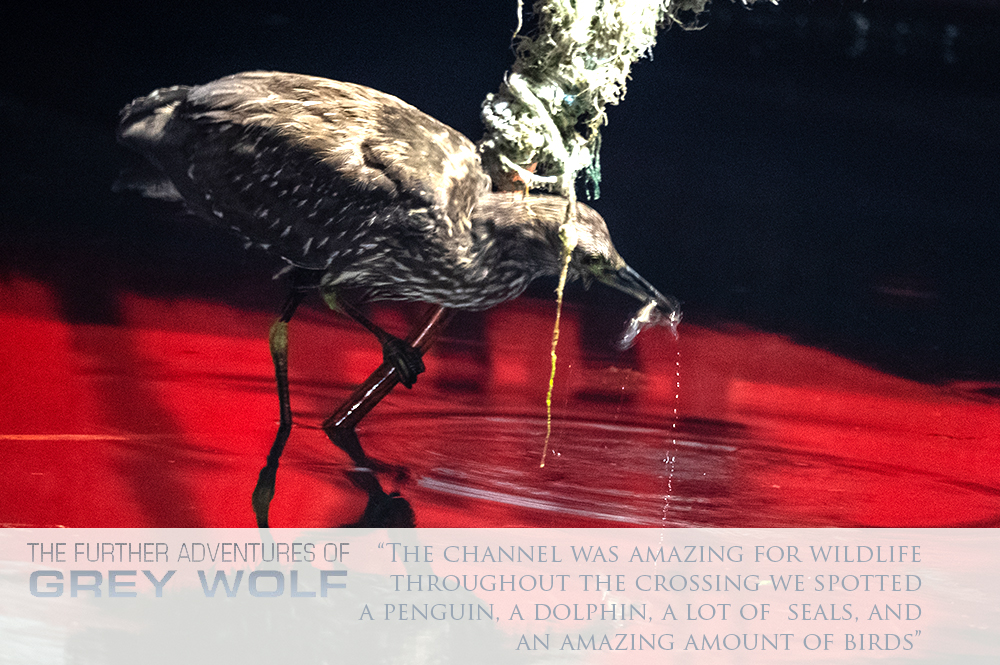 Today we had to get as much done on the boat as possible so we could see some more of Chile. We had to fix the forward looking sonar and the trash compactor, because neither were working as they should. Once we had got them working we then went into one of the marina’s conference rooms with every laptop and computer we could find, and set up downloading updates. Because Wi-Fi is rare we had to take advantage and get everything done that we could, and because of how complex and electronically controlled Grey Wolf is, of course you’re going to have to update things. So for the rest of the day we drained the marinas Wi-Fi downloading software updates for everything from the radars to the iPads. Once we had finished doing this we were invited onto the neighbouring superyacht – the ‘Rosehearty’, for some drinks, but first of course, we had to go and buy some beer, because we couldn’t turn up empty handed… and we’d drank all of the Tahitian beer. So that was a mission in itself, luckily they have Uber here so we got an Uber all the way into town, I got dropped at McDonalds to get some food, whilst Simon went with Manueal to get some beer. Unfortunately, for me I do not speak a word of Spanish, and McDonald’s staff do not speak a word of English, so after much confusion and four employees trying to work out what I wanted, they eventually had to point to each picture on the board until I nodded. Anyway, we finally got on board the Rosehearty, which is a beautiful boat, met the crew, had some drinks and stumbled back to Grey Wolf in the early hours. 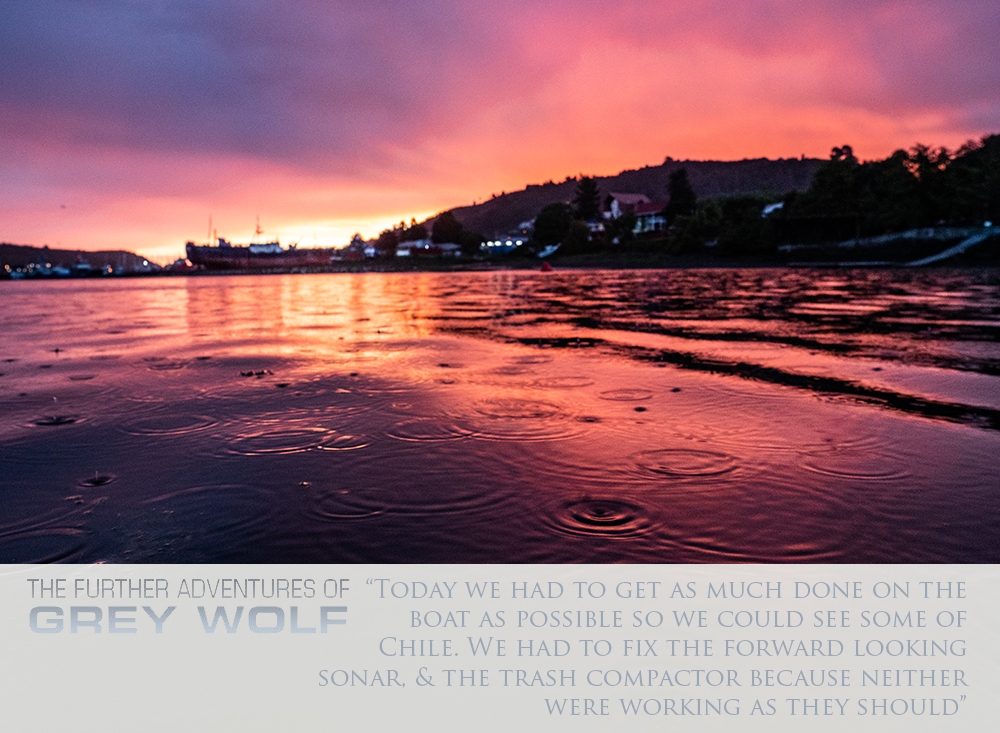 So this morning I started by finishing some updates with Peter, and then we tried putting some ‘Ice’ software onto the commercial Simrad radar. This didn’t go to plan and completely sent the radar into mayhem and stopped it working. It turned out there was a problem with our software and we passed the problem onto Simrad who went away to find a solution. That afternoon I went off with Jeri to the neighbouring tourist town of Puerto Varas, the town had lots of shops and bars, and was full of life. It was also good to get away from the boat for a bit and see some of what Chile had to offer. 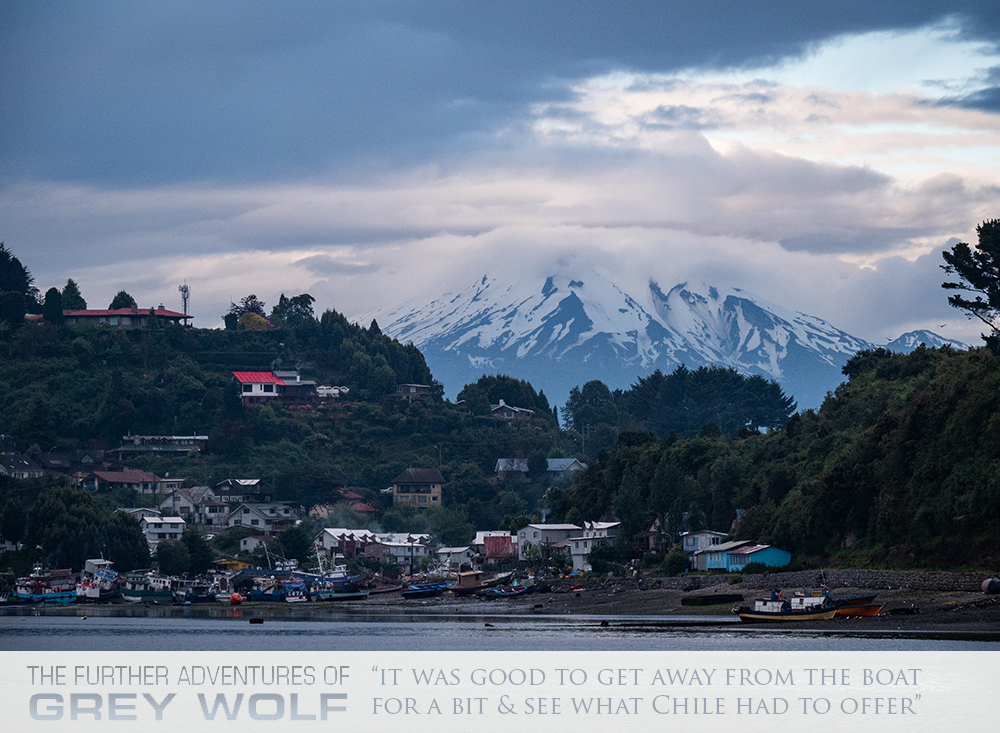 We stayed the night in Puerto Varas, waking up with a slight hangover then heading out to see some more sites. The town is situated on a lake that is overlooked by two volcanoes. We decided to take a high-speed rib around the lake, visiting some of the other towns on the lake and getting some good pictures of the volcanoes. After that, we bumped into a couple of the crew from the Rosehearty and it was nice to see some familiar faces. After a few coffees and beers, we headed back to the boat to see what Peter and Simon had been up to. My time in Puerto Varas, and in Chile in general, has encouraged me to start learning Spanish. Around 20 countries in the world, and around 430 million people, speak the language, so I think it would be a pretty cool and helpful thing for me to try to learn. On the bus journey back to Puerto Montt I reflected on my choices over the last few years, and I never thought when that when I applied to do an apprenticeship at Berthon, that a few years on I’d be in South America, on an amazing yacht, meeting new people, and seeing some incredible places. Thinking back, I definitely made the right decision. 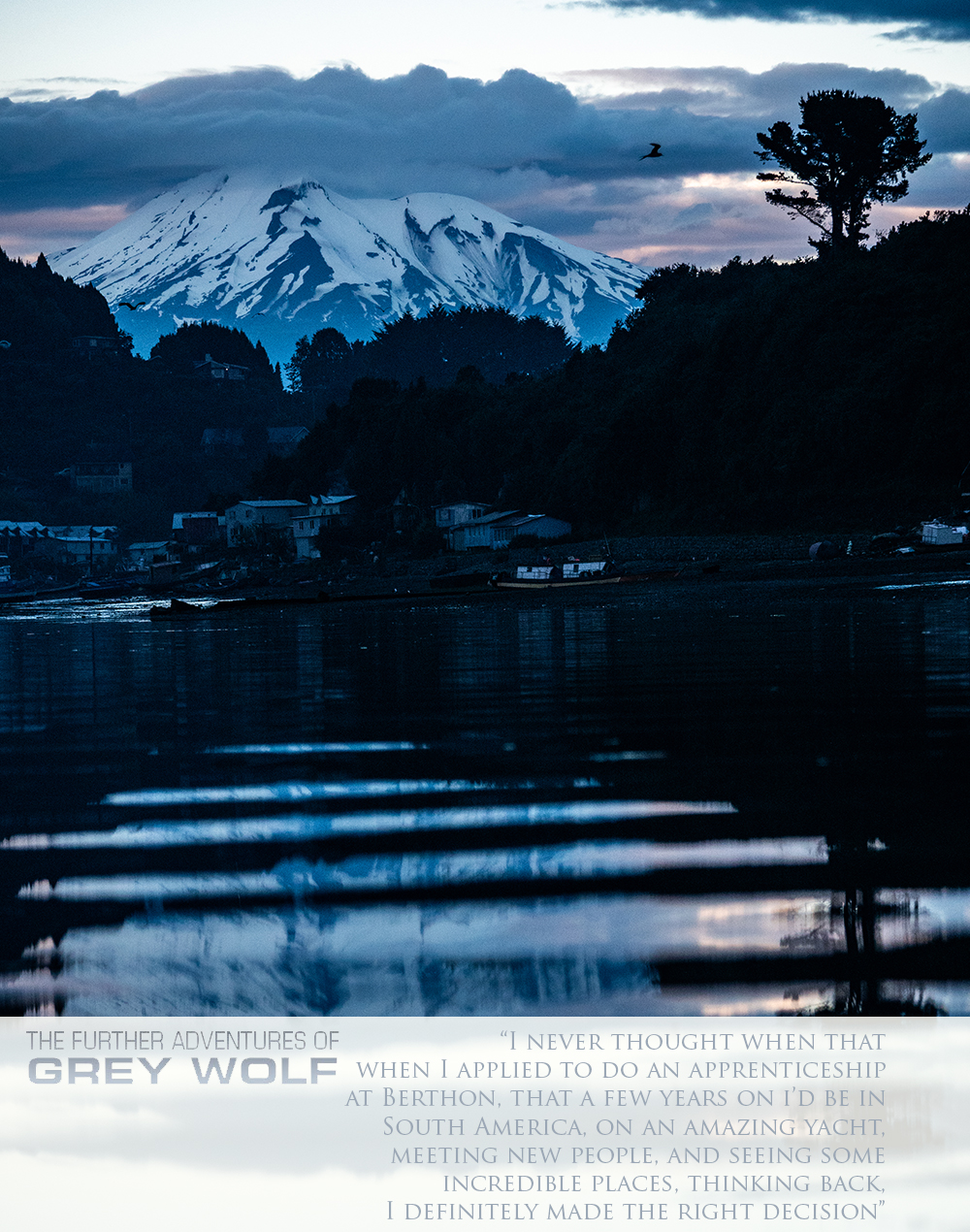 So today my flights were confirmed back to sunny Lymington, for tomorrow. I started today by updating the entertainment system and media on board the boat, that went surprisingly well. We then spent most of the day in Puerto Montt town centre buying spares and bits for the boat; as the boat is due to go to Antarctica in a few weeks, so needs to be prepared. Unfortunately walking back to the boat the bags broke and the contents went into the sea. Of course, the bags that broke contained the most important item on the shopping list, the beer. Therefore, we definitely could not say goodbye to that, meaning Simon had to go for a refreshing swim to retrieve it. This afternoon Grey Wolf’s sister ship the FPB 78#03 Iron Lady arrived in Puerto Montt next to us. A very rare moment to see two already rare boats, especially in the same marina. We had a chat to the crew on board, welcomed them to Chile and had some drinks, and I enjoyed my last night away from the UK before I’d have to fly back to Berthon HQ.

So today was the day I had to leave Grey Wolf behind, and head back to Berthon HQ and let the next lucky apprentice have some time. I packed and said my goodbyes and got an Uber to Puerto Montt airport, as Uber seems to be far more effective than the local taxis. I then had to get a flight from Puerto Montt to Santiago, and then a 14 hour BA flight back to London. I left Marina Oxxean at around 10:00am Tuesday, and arrived in London at 10:00am Wednesday. I was pretty lucky and the direct flight to London was almost completely empty in economy so I had a whole row to myself, enabling me to get a good nights sleep – we even flew over Berthon HQ; pretty sure they did that on purpose!

Reflecting back, I had an amazing time. I’ve learnt an astonishing amount that I can bring back to Berthon and use, and I’ve met some amazing people. I have to thank Peter and the Grey Wolf crew for giving us the opportunity to do these trips, and I have to especially thank Berthon for allowing me to go off for a month and have this amazing experience. One thing I will say is, if you’re thinking about doing any type of apprenticeship at Berthon, but you aren’t sure, definitely take these types of experiences into consideration. You won’t find many other companies in the marine industry who will send you abroad for a month to go and work on a luxury expedition yacht… 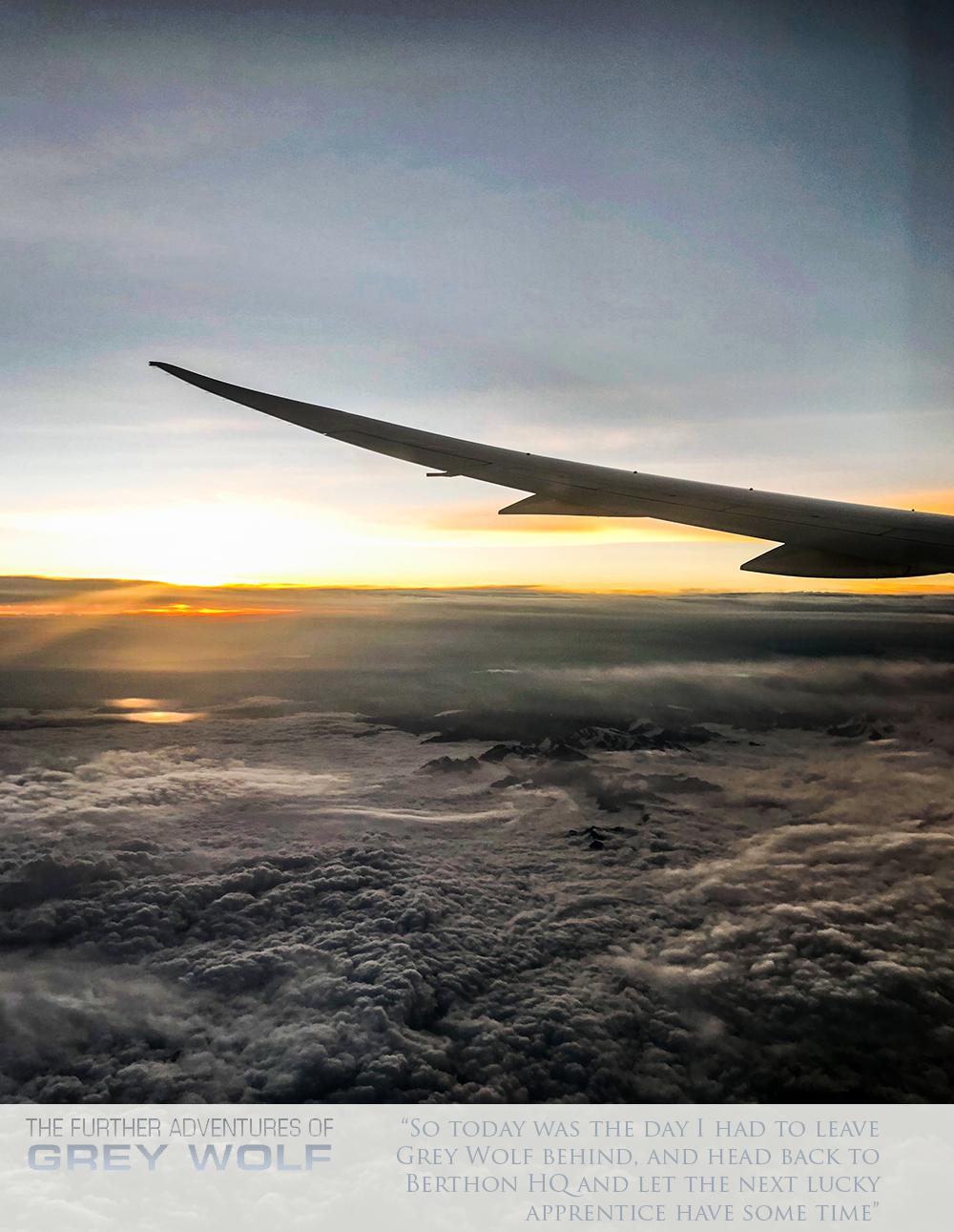 Stay tuned for updates from the apprentices who will be following in Dan’s footsteps.