Today we had to do a bit of travelling to get to the next glacier spot. Again more beautiful mountains and views for us to see. We arrived around midday. The waters were so blue and we could see one of the glaciers from where we had dropped anchor.

Peter and I tried yet again to fix the washing machine. After about 2 hours, it did ‘work’ but I have my concerns for how long this will last.

Simon made a crab trap out of a box and dropped it down. After dinner, we took the tender to go on yet another fishing trip hike, to a nearby lake, on one of the islands. At this point, we were not surprised when we did not catch any more fish so we headed back to the boat. 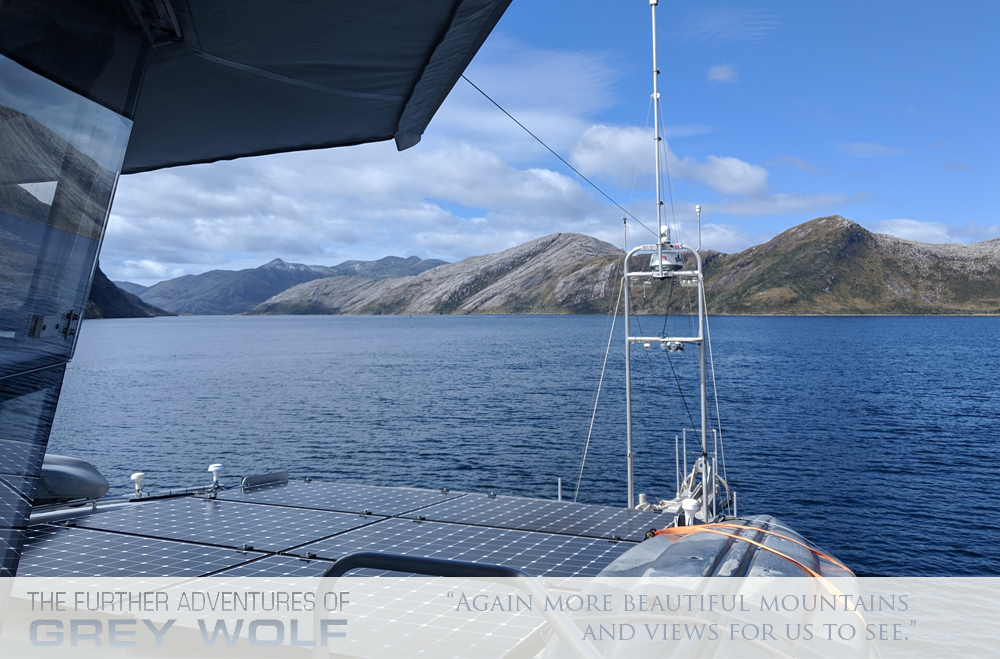 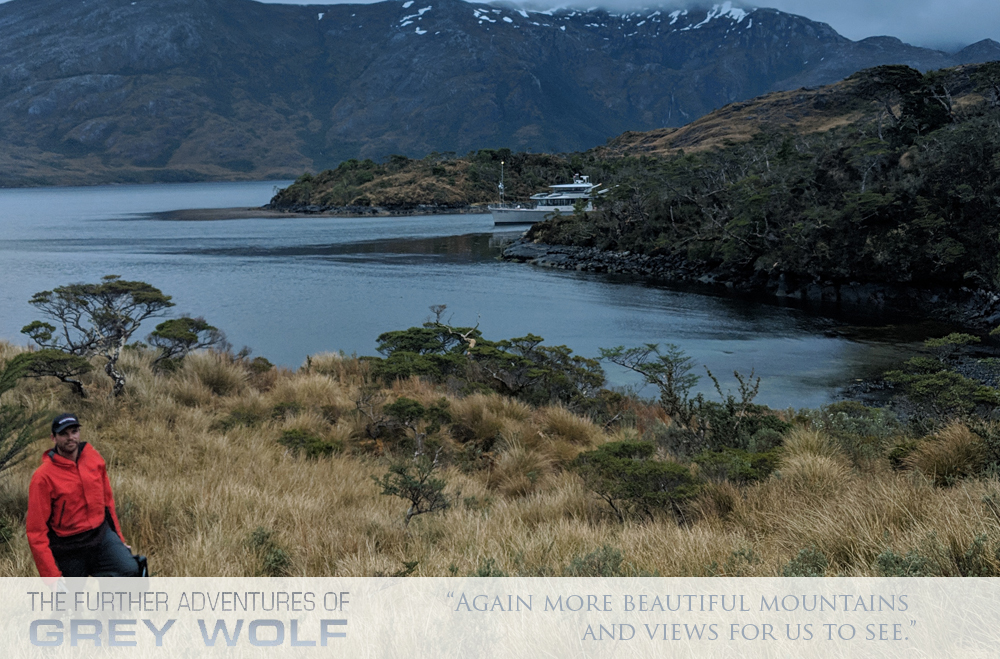 Today Jerry, Simon and I went over to the glacier to have a better look and so Simon could launch the drone and take some more video.

Peter was making pizzas for us this evening, which were amazing.

Simon and Matt tried fishing off the boat and surprisingly caught two of the smallest fish I have ever seen, but they were still happy. The crab trap was pulled up but sadly, there were no crabs. We did manage to catch a lamprey, which looked a little funky and was super slimy. 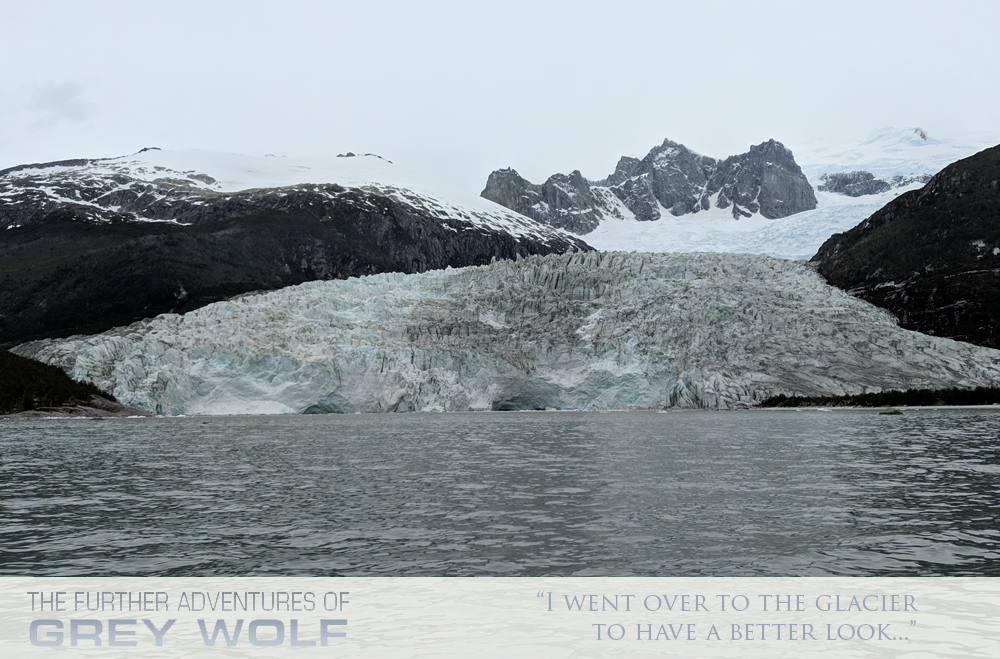 Today is the final stretch to Puerto Williams, which is sad, as that is where I will be departing. I woke up late, as I did not get much sleep the night before.

We arrived around 1330 but were not allowed in the marina, so we had to drop anchor just off shore.

Jerry, Peter and I went ashore to register with the Armada and so I could go scout out the town and find shops to get supplies. It took me all of 10 minutes to walk to the other end of the town. It was tiny!

After I found a few supermarkets, I headed back to the tender but could barely see due to all the dust that was being blown-up. I made it back and we all made the decision it was too dangerous to drive back to the boat. When walking to the shops it was so windy, we could barely stand up and the wind was picking up small stones, which was painful.

We were all hungry but there were no restaurants open due to siesta time.

One of Jerry’s many skills is that he can open any closed shop or restaurant just by talking to the owner or demanding we be let in. They opened two hours early for us, but to be honest it was just nice to get out of the wind.

We made it back to the boat later that evening, when the wind died a bit, with leftover pizza for the rest of the crew. It was still windy when we were lifting the tender back on but we managed. The pizza ended up in the bilge but it did not stop them from eating it. 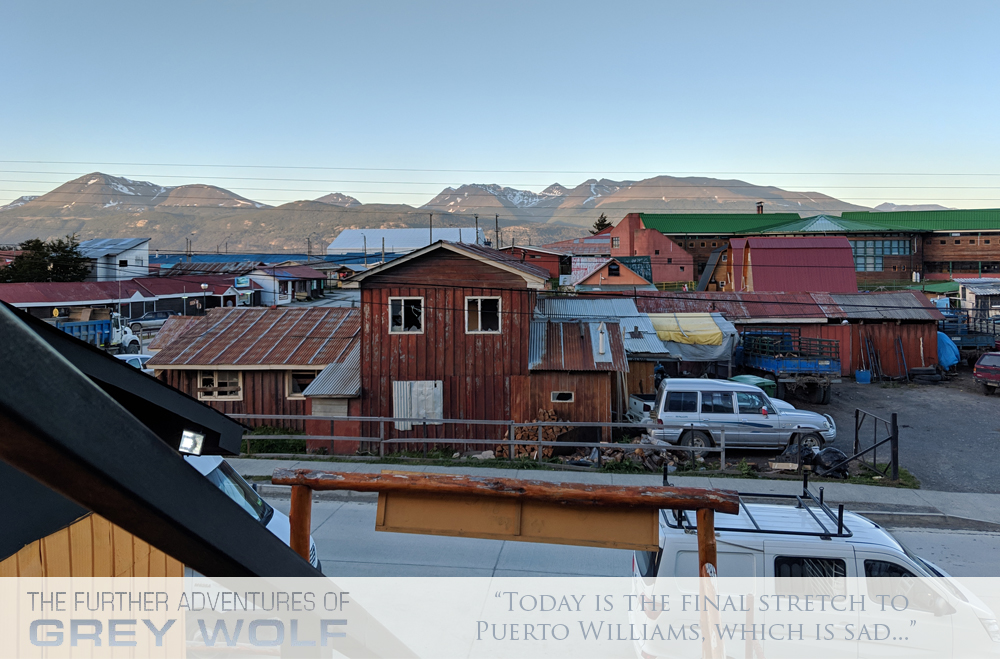 Today we are just catching up with a few odd jobs.

I had to fix the fittings for the awning. We went on land again to find more shops but all there was were shops with old fruit and veg and a LOT of long life foods. So many tins! Evie and me cooked dinner again tonight and then spent the rest of the evening editing the welcome aboard pack Peter had made for the guests for when they come aboard.

Today was a day for shopping, so whilst Evie and Matt went ashore, I stayed on the boat and started cleaning my cabin ready for when I leave.

Simon came up with the idea of ‘Tikka Masala Sausage Sheppard’s Pie’, so I cooked that and it was actually a pretty good idea!

When it was getting late, Simon noticed smoke coming from Puerto Williams.

The fire siren on the island started going off and all the fire engines, police and ambulance arrived. The Navy base food supplies shop had gone up in flames.

Today was the day the fuel was arriving for the trip to Antarctica so we were ready to go at 1000. The pilot showed up and took us to refuel.

We took the 10,000l and refused to move until the rest showed up.

Whilst we were waiting, we started taking stuff off the boat to move into storage, which took a while. Hosè, the agent, showed up and took all the stuff to storage and luckily, that is when the fuel arrived. We took on the rest and went back to our mooring with the pilot. 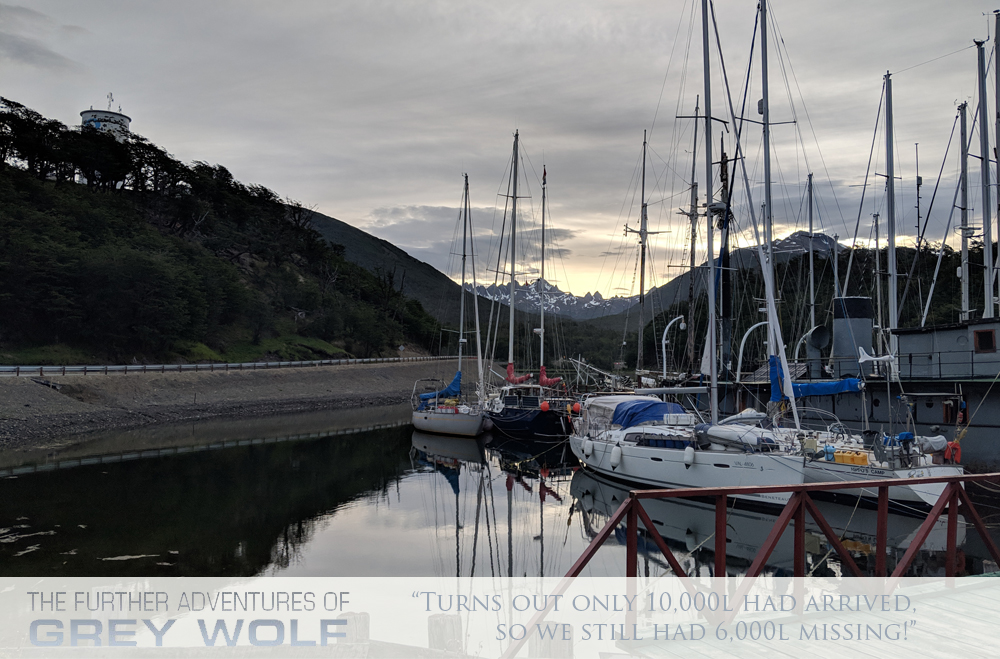 Today was my last full day on the boat and also the day for Matt’s dentist appointment. We went to the Navy hospital and waited for about 1 hour to be told that the dentist was in a meeting and to come back later that afternoon.

We went back to the boat and I started to pack my bags ready for tomorrow morning. Simon and I went to the pub to get some Wi-Fi and food.

I woke up and helped Evie do some cleaning ready for their departure to Antarctica today.

1000 came around too quickly and it was time to go. I got my bag into the tender said a sad goodbye to everyone and went ashore.

Hosè dropped me off at the hostel and luckily, there was a room for me to stay. There were about 10 of us in the hostel at this point, some from Canada, Barcelona, Vietnam, France and Argentina and luckily, everyone spoke English!

I went out for lunch with some people from Canada and they invited me on a hike they were doing tomorrow, which was perfect as I had a day to spend in Puerto Williams.

We explored the town a bit more and found a lot of dogs. It was soon time for dinner and luckily, there were spares going so I had some of that. We all stayed up and played cards until around 0200. I decided to go to bed due to our early start tomorrow. 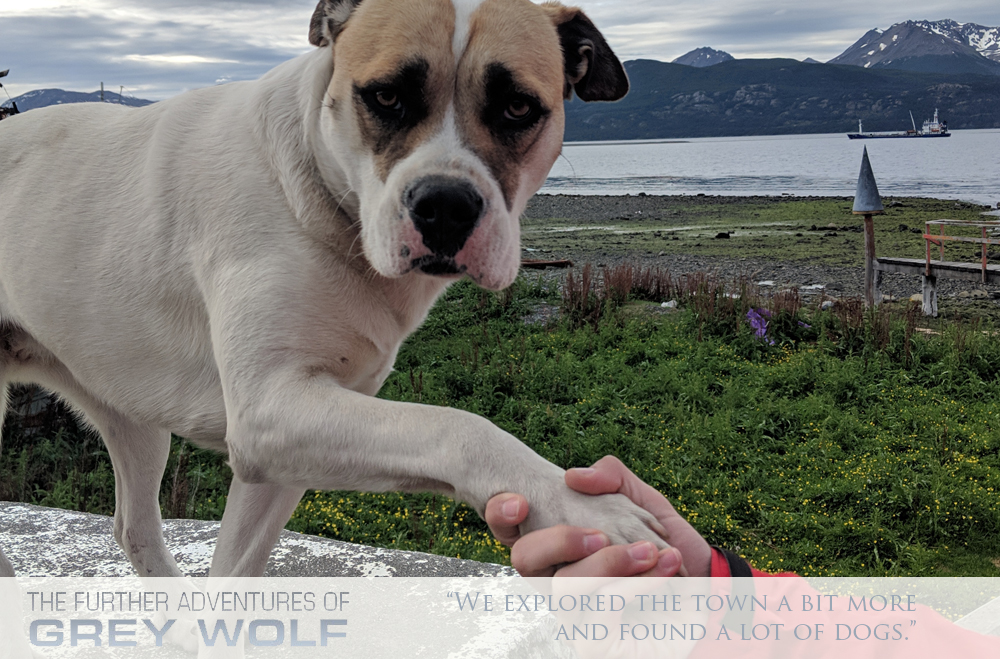 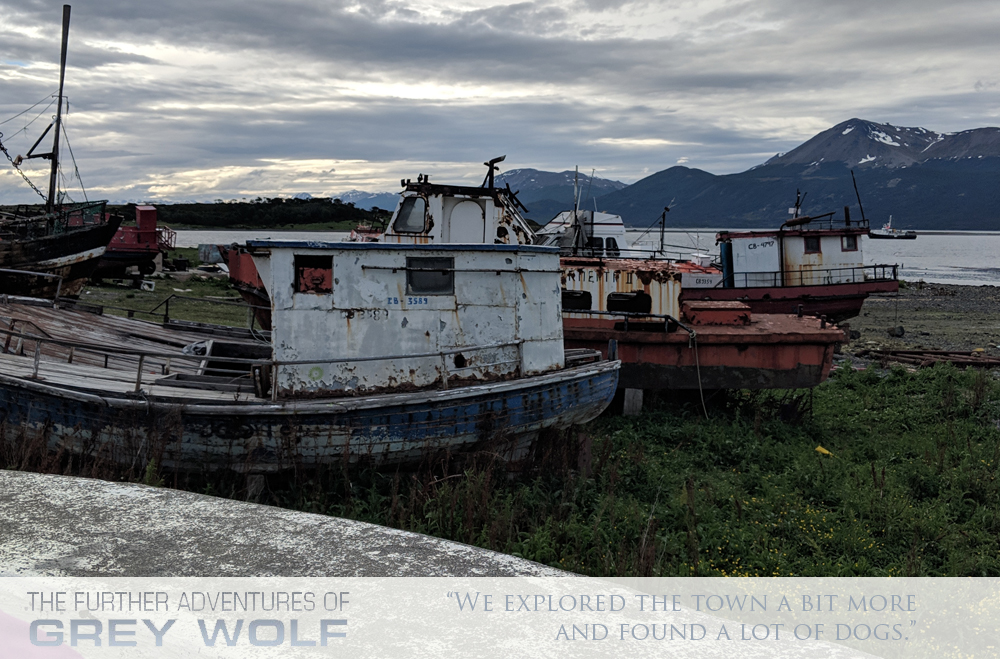 Today we woke up early to be greeted with breakfast from Cecelia, the owner of the hostel, which was great.

We then got ready to set off.

Cecelia offered to drop us off at the start of the hike up Los Dientes de Navarino, which we all gladly accepted.

The hike up took around 5 hours but the view was definitely worth it. You could see all the lakes and the amazing mountain range. The hike back was on a large slope with lots of loose stones. I did have a few scares where I thought I was going to fall. The rest of the way back was along the lakes and through the forest. We assumed it would be easier than the first half; however, it took longer as there was a bog every other step we took.

I ended up in the bog a fair few times – much to the others amusement. 12 hours later, we were back in the hostel freezing cold so we started up the fire. Again we stayed up late playing cards and chatting until around 0400, but I had to go to bed again as I had to travel to Ushuaia tomorrow morning. 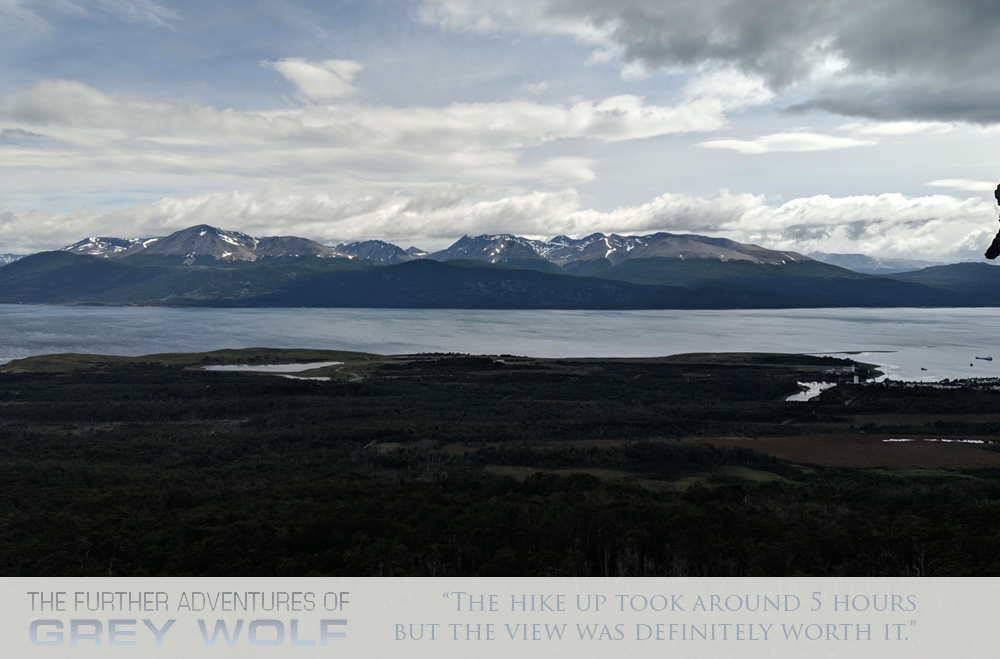 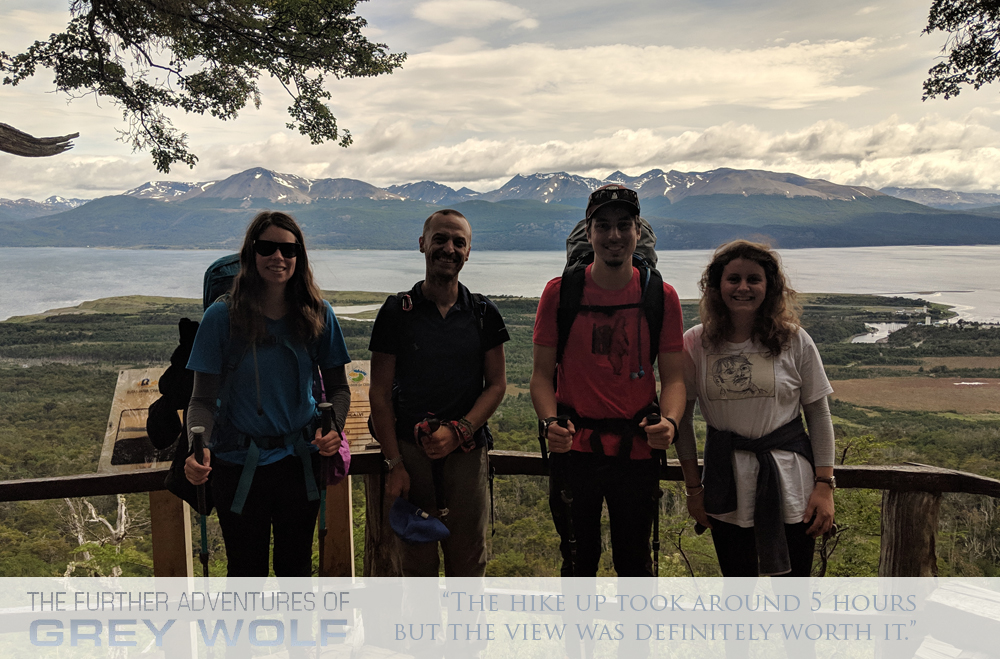 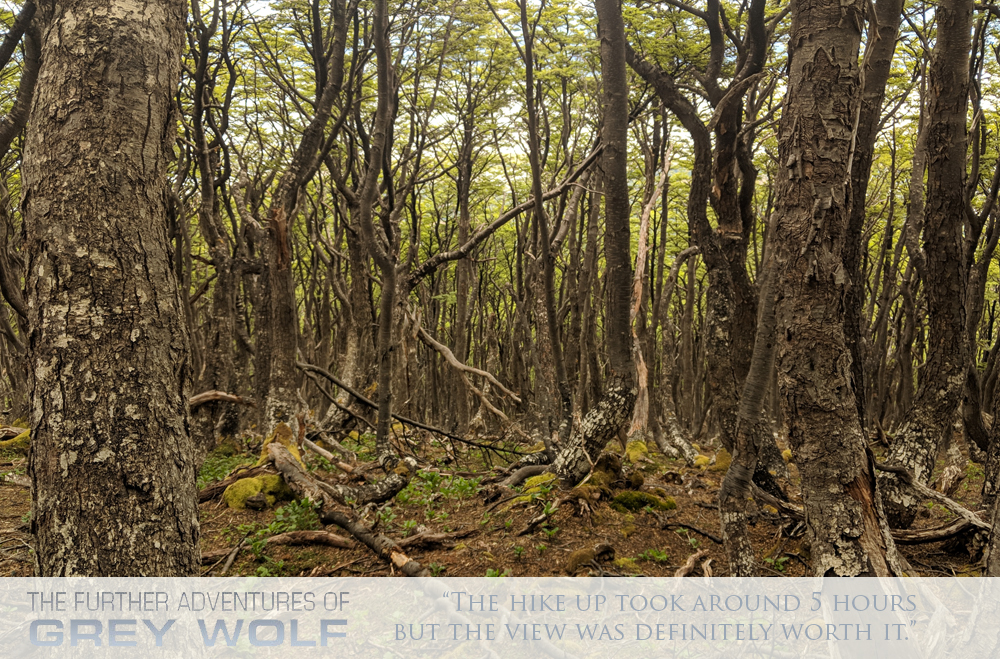 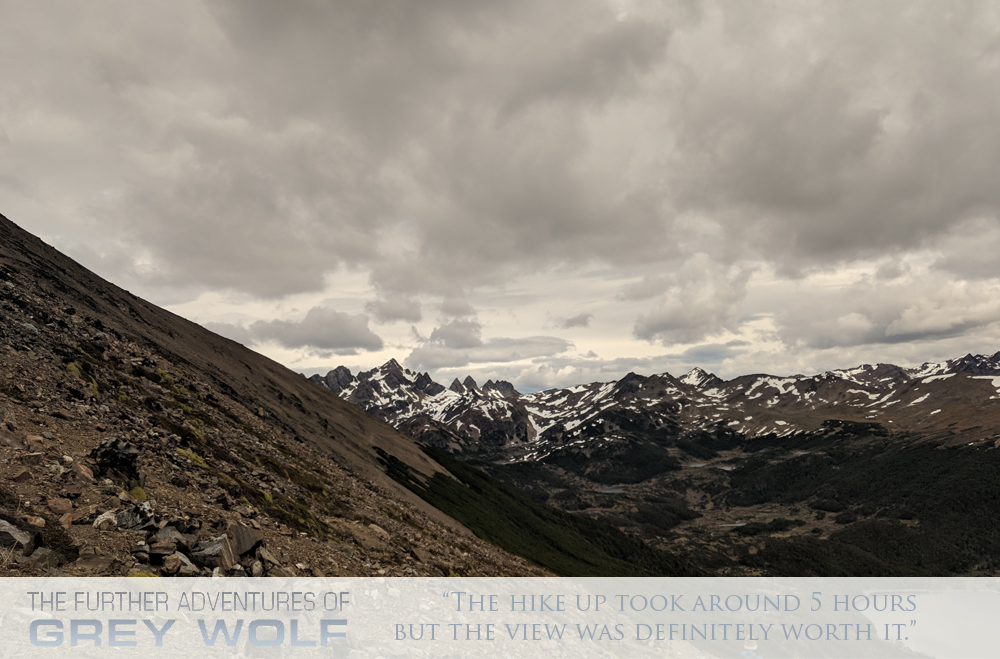 This morning I woke up early to make sure I didn’t miss my coach to catch the boat across to Ushuaia.

Cecelia brought over breakfast around 0845 as always. It was getting very close to 0900 which made me panic as she was taking me to the bus. ‘Don’t worry Stephanie, everything’s okay’ is all she kept saying. It was 0902, ‘Let’s go Stephanie!’. We made it to the bus, which of course was late. At 0930, I got on the bus and was on the way.

About half way there the driver did a headcount and there was one too many people on the bus and of course that person was me. I caught the wrong bus and had to get off. I just sat down on the side of the road as I didn’t know what to do.

About 15 minutes later a car came up the track, shouting out my name. They took me all the way to the boat, which was waiting for me. Everyone is so friendly over there. I got on the little boat and made it to Ushuaia.

I went to a few hotels, which were way too expensive. Eventually I found a hostel which cost me the equivalent of around £7. I signed into my dorm and met some of my roommates. Three of the people in my dorm are catching the same flight as me so we are going to share a taxi to the airport. We all went out in the evening to have a look around and went to one of the local bars.

Today my roommate woke me up, ready to catch a taxi to the airport.

We went down to the kitchen for breakfast, which was sadly pretty rubbish, so decided not to.

The taxi arrived and took about 20mins to arrive at the airport.

We got straight through the airport ready to catch the plane. Turns out our flight had been delayed by two hours so we had to sit and wait.

Eventually we made it on to the plane. I was slightly worried about missing my next flight so could not really sit still on the plane! 2 hours later it landed in Trelew for a pit stop then continued to Buenos Aires, which was around another 2 hours in the air.

I arrived in Madrid, around 11 hours later, and of course my flight back to the UK was delayed by another 2 hours! It took around 2 hours to get back to the UK, which in turn means I missed my coach back home.

My bag was the last to come out so I also missed the next bus. I managed to catch the next bus around 9pm and made it back to Ringwood – where my friend picked me up.

Thank you so much to everyone who has been involved in making this a once in lifetime experience for me. I never thought I would find myself in one of the most remote parts of the world. Thank you to Berthon for giving me a opportunity that no other apprenticeship could match. Thank you to Peter and crew for allowing me on the boat and ensuring that I had a great time. I shall miss you all. If you are looking for an apprenticeship in the marine industry Berthon is the way forward. 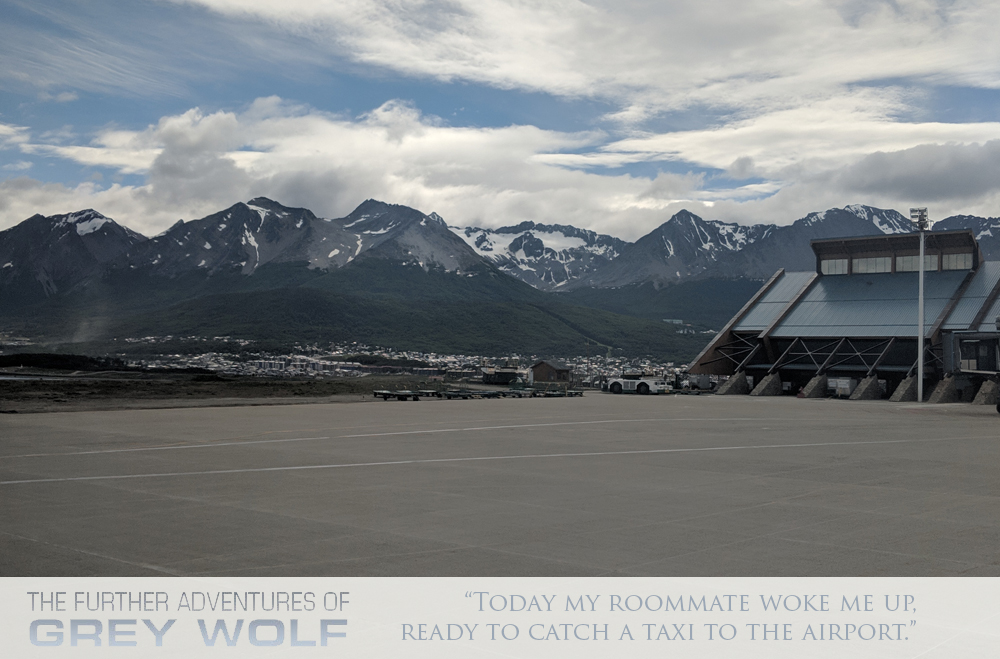 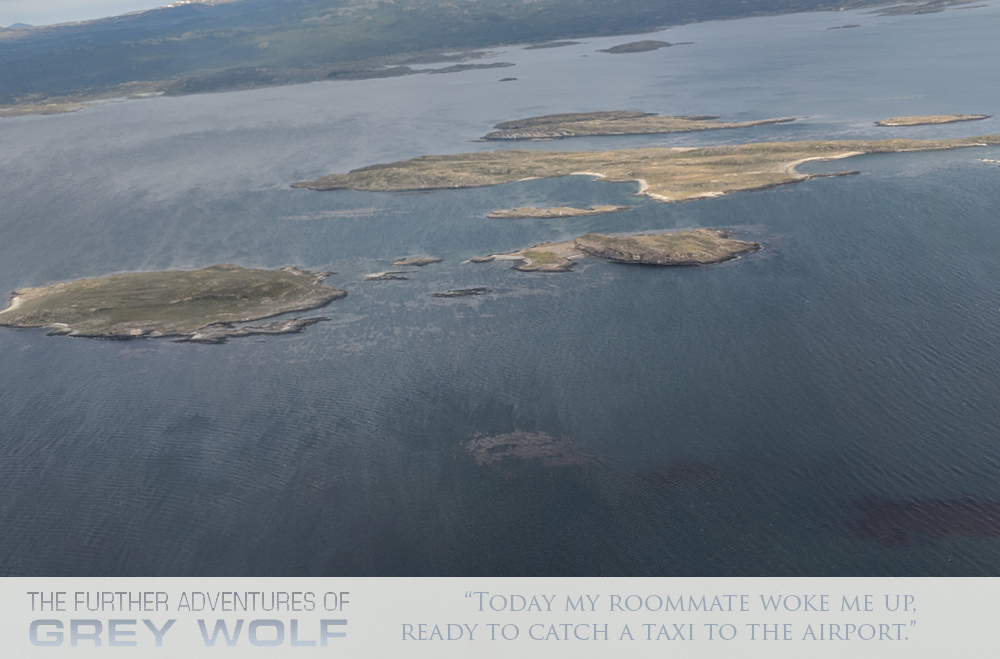 Scheduled updates will continue to be posted here – https://greywolf.berthoninternational.com/