From the UK, to Mangareva and then onwards to Open Sea | Apprentice Dan boards FPB 78 #2 GREY WOLF II

We (the landlubbers at Berthon’s Lymington HQ) introduced you to Marine Electrical apprentice Daniel Savin very briefly in ‘Welcome to the Further Adventures of GREY WOLF’.

Before reading on, we thought it best to give you a little insight into this would-be intrepid apprentice adventurer…

Daniel began his apprenticeship as a Marine Electrician at Berthon in September 2015, and is currently in the 4th and final year of his training. He completed his final City & Guilds exams in the summer of 2018, gaining distinctions. He has also passed his British Marine Electrical Training (BMET), as well as the Marine Electronic Installers (MEI) course. He has gained experience on fault finding and small installations on berth holder yachts in our marina, as well as being involved in various major refits and upgrades on private yachts and commercial vessels, the latest of these being the refit of MGB81.

Dan applied to join the ‘The Further Adventures of GREY WOLF’ and following his application, Skype interview with GREY WOLF II owner Peter Watson, and deliberations organised by Berthon Yard Manager Keith Longman, Dan, in front of his peers, was informed that he had been chosen for the first trip. ‘I was delighted by the reaction of his fellow applicants who genuinely congratulated him’ says Keith. ‘I am sure Dan will gain a great deal from his adventure and Peter will gain an enthusiastic crew member that will not let him down. I wish Dan all the best and look forward to hearing his news as he navigates the South Pacific’.

It’s Friday 19th October, and today I arrived in Tahiti. I left Heathrow Airport yesterday at 8am. I then caught a 2-hour flight to Paris where I spent a couple of hours, before taking a 12 hour flight with Air France, which was very nice as they provided me with food and entertainment. On arrival in in Los Angeles at 22:30, LA time, I spent an hour getting through boarder control and security. From here I then boarded another 8 hour flight arriving in Tahiti at 5:30am Tahitian time (04:30 British time) where I met up with Peter, the owner of Grey Wolf. We then went back to the house we were going to be staying in, showered and settled in since we had been travelling for a very long time. We then went into the main town in Tahiti where we had a little look around, some food and some beers, Peter got a haircut, and we relaxed before an early night as we had to be up bright eyed and bushy tailed at dawn to catch our flight to Mangareva where Grey Wolf was currently anchored and waiting.

So it’s the end of day 2 and its 20:00. Today was a busy day, we left our apartment at 6:30am and headed out for the airport to catch our flight to Mangareva. When we arrived at the airport to check our bags in we were told, by the check in staff, that they could not take our bags as they were collectively too heavy, and we would have to leave two out of the three behind to be taken on another flight. This wasn’t an option as the flight to Mangareva only runs every 10 days! In the end we negotiated that we would try to make our bags lighter. We ended up leaving the un-important items such as shampoos, shower gels, and some bits for the boat, and managed to squeeze a substantial amount of items into my hand luggage bag without them noticing. After weighing the bags again and paying a fee they decided to let us take all of our bags.

With Mangareva only a short 3 hour flight away, we soon landed at the airport to find that it was essentially a strip of concrete with a wooden hut as the terminal. The airport was on its own island and the runway has sea either side of it, meaning we then had to wait 45 minutes for a ferry to take us to the main island.

When we finally reached the island, Simon met us at the pontoon and picked us up on one of Grey Wolf’s tenders. Grey Wolf was moored approximately 100m off the shore in the bay as there was nowhere to dock the boat for any length of time. When we finally got on board I had a quick safety briefing from Simon and Peter with a tour of the boat, along with all of its equipment and toys.

For the rest of the day I relaxed and settled into the boat and started trying to get used to the fact that there was no Wi-Fi and no cellular reception, which I now realise I most definitely take for granted in the UK.

Today was my first full day on board; I woke up early around 5:00am due to it being so light and hot, and partly because I was still adjusting to the time difference. We then set to work on the GPS Satellite compass. This was not working as it should, it was thought to be because of the two antennas being too far apart. We spent most of the day moving one of the antennas from the forward mast, up onto the A pole on top of the wheelhouse roof, and re-routing the cables around the boat. Working in paradise! 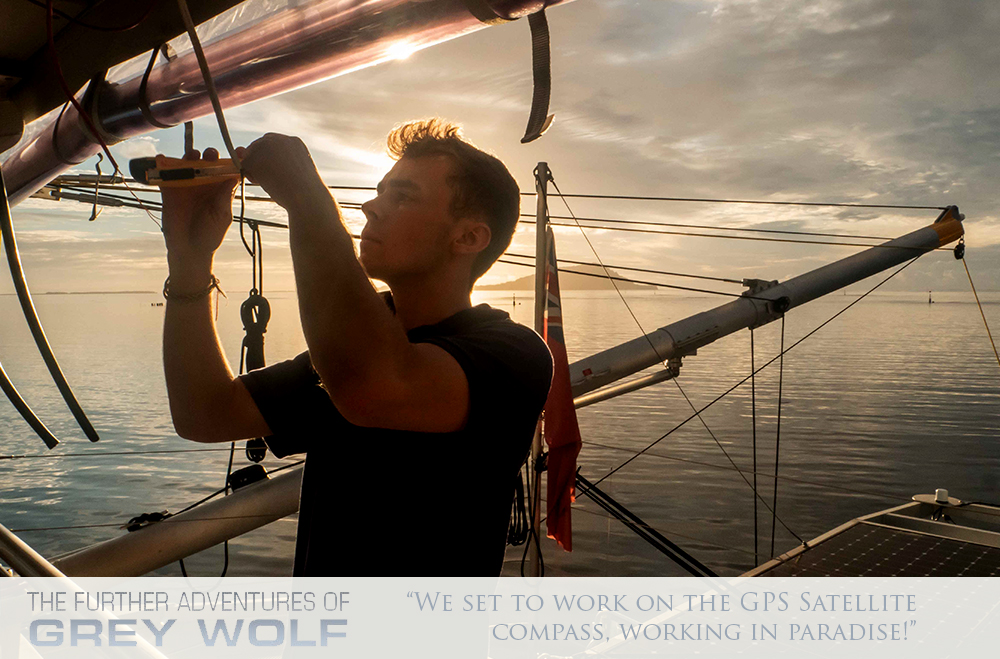 We woke up early today around 5:30am again, and pretty soon we started getting bits ready for the boat. I made the connections on the KVH GPS satellite compass and we tested that. Unfortunately it wouldn’t communicate to both the lower helms, and the upper helm. After a lot of fault finding it turned out that one of the cables, that was supposedly redundant, was not. Once this was fixed I decided to get dropped on the island for an hour or so, where I managed to have a little walk around and took some pictures, and most importantly got a little bit of Wi-Fi, even though it was the slowest Wi-Fi ever.

Around 18:00 we lifted anchor and started to head towards Pitcairn which was around 300 miles away and would take approximately 30 hours. I was given a watch rotation time of 9-12 every day, and for the first one I was accompanied by Simon who taught me what to look out for on the radar, how to keep the boat on course, how to fill out the log book, and just generally how to monitor the boat and keep watch, for signs of trouble. Only an hour into my first watch with Simon I was inevitably sea sick due to not being used to the constant rolling of the boat, but I had some crackers and water, and just about made it to the end of my watch. 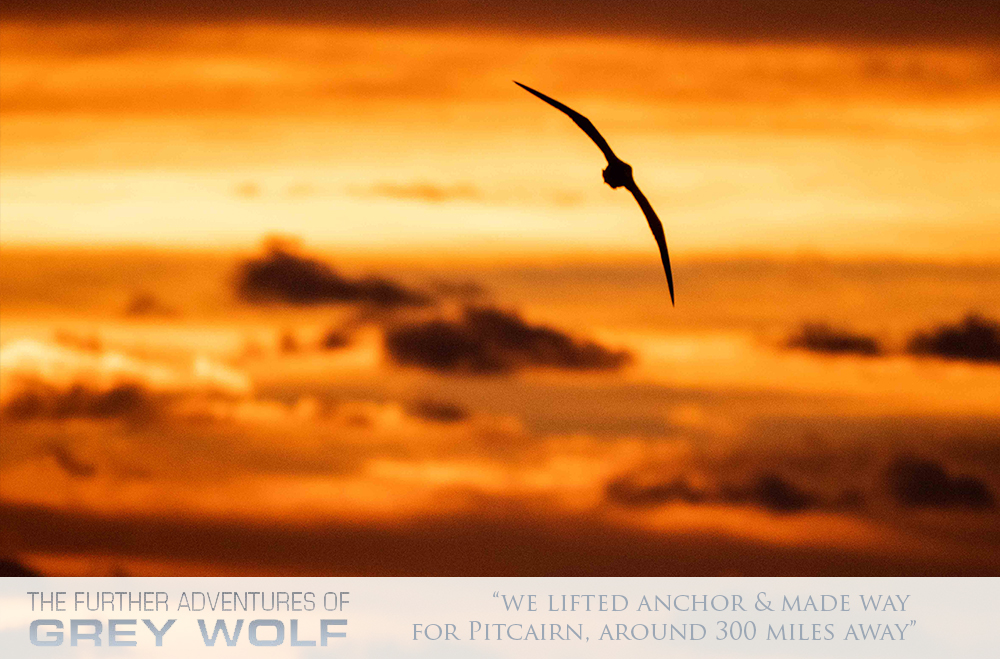 I woke up around 8:30am still feeling a little queasy but not as bad as the night before! I grabbed a coffee and went to start my first day shift, again under supervision from Simon. I learnt more and more about watch keeping and about the boat, and specifically how to tell apart a vessel on the radar from a rain cloud.

The rest of the day was pretty uneventful with just a small storm, but then again I was asleep for most of the day. I went on watch again at 21:00 and watched a huge rain cloud or ‘squall’ pass on the port side of the boat on the radar and out of the window. Another then came up behind us and battered the boat in rain. I was told that if I was on a sailing boat I would be rushing about the boat every time a squall came up on the radar, so I am thankful for that.

This morning at approximately 5:45am we reached Pitcairn Island; unfortunately the weather was too bad for us to anchor up and go ashore which was a shame, but we spoke to them over the VHF and took some nice pictures as we passed by. We then set a course for Easter Island which was 1115 nautical miles away and would take us around 5 days to reach. Throughout the day nothing really happened finishing my watch at 12:00pm and then went off to bed; however, I then had to be back up at 16:00 because, unfortunately for the crew, it was my turn to cook. I made spicy beef noodles, and tried to remember back to a time when I could put something down on the kitchen side, and not have to watch it go shooting across the room! 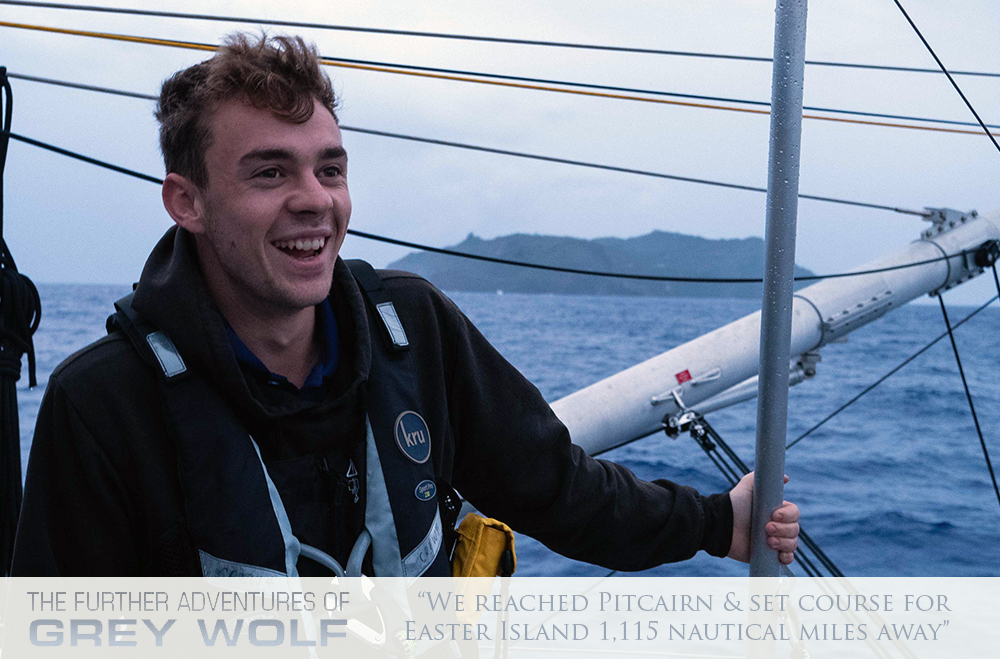 Today the sea was a lot rougher than it had been, consequently making me feel a little worse for wear when I woke up. However after I finished my watch at 12:00pm, and I still managed to spend a couple of hours with Simon going through the RYA rules of the road, and other valuable lessons. At around 18:00 I woke up for dinner and we had our first amazing sunset that lasted about 30 minutes and made the bad weather, almost, worthwhile. 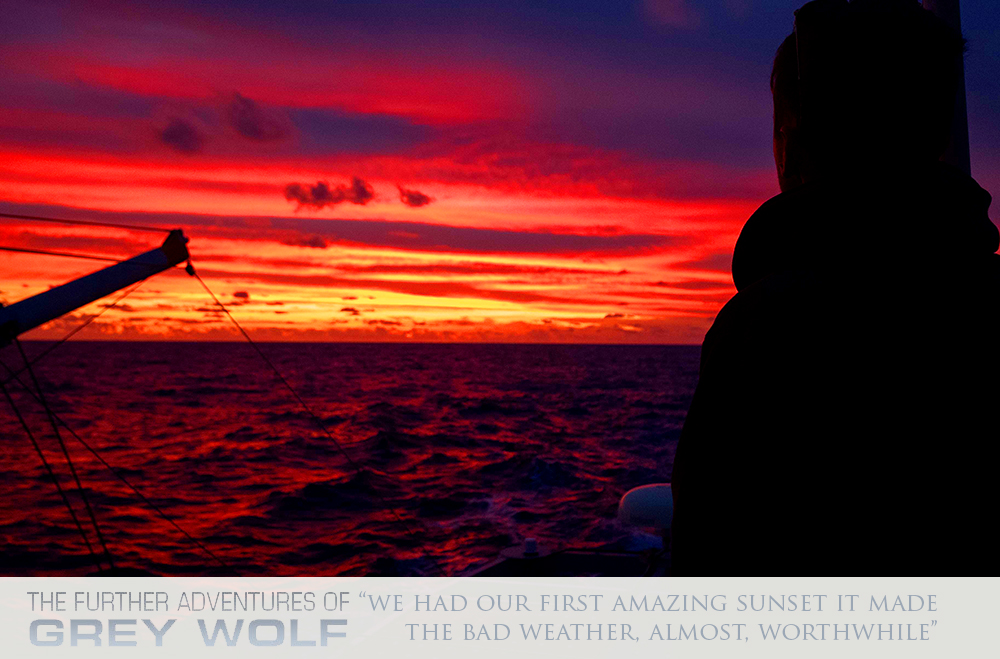