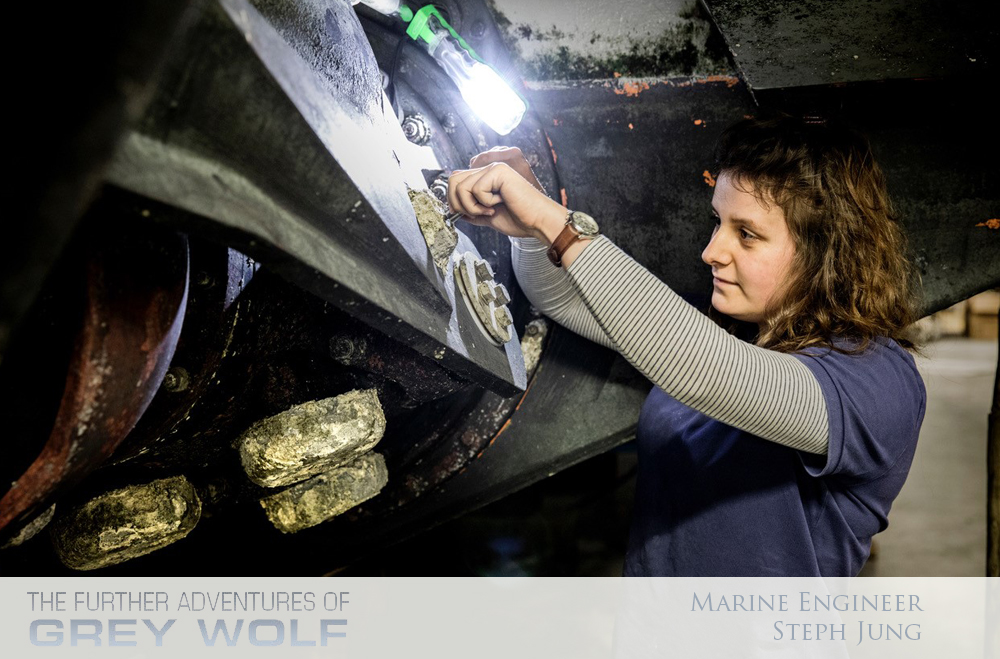 After leaving school Steph undertook a full time course at Brockenhurst College, studying Performing Engineering Operations at Level 2, and also completed work experience with our own Berthon Boat Company during that period.

She subsequently began her apprenticeship at Berthon in September 2017, is currently in the 2nd year of her training, and studying for her City & Guilds Level 3. Steph has settled into her apprenticeship extremely well and her progress has been excellent to date – honing her engineering skills on many of our commercial projects, as well as private yachts.

Yard Manager Keith Longman writes ‘As Steph joins GREY WOLF II, I believe she will prove to be a real asset to the boat’s crew and I am sure Peter will benefit from having an enthusiastic and able apprentice engineer on board. I look forward to hearing of Steph’s experiences, as they leave Puerto Montt on their voyage covering the length of Chile.’

First dilemma of the trip – the coach to Heathrow drove straight past me so I had to chase it down. Luckily, it stopped at a junction and I stood in front of it until the driver let me on. His excuse was ‘Sorry! But the coach is late to the airport and we have customers on board who need to be on time…’.

Got to the airport and me and the driver made up. After a few hours, got to my gate to find out my flight had been delayed, but only by 30 mins luckily!

Eventually I made it on to the plane and fell straight to sleep. About 2am Friday morning I woke up HUNGRY so spoke to a flight attendant to find out all the food had gone, but he sorted me out a meal leftover from first class. I then fell straight back to sleep.

We landed in Santiago at approximately 1pm (GB time) – Santiago being three hours behind. I got off the flight and had about a six-hour wait, which I was not looking forward to. Luckily, but not, I only had to wait about 2 hours as it took me 4 to get from one flight to another, due to the language barrier and lack of signs. 2 hours off the plane and I hadn’t made it from bag collection to where I next had to check in my bags for the flight to Puerto Montt!

At this point the airport staff had realised I was a traveller alone and took this to their advantage. Attempts were made to steal my money multiple times…

I finally made it to the airport lounge and waited for the next plane. I landed in Puerto Montt at approximately 4:00am, making it out of the airport around 5 to find many taxis fighting over customers.

I got in a taxi and 25 mins later I got to Oxxean Marina where GREY WOLF was berthed. I was greeted by Peter, Simon, Jerry, Matt and Evie. I unpacked and they had dinner ready for me.

I woke up early and headed up to meet everyone, made a coffee and had some cereal. I had a busy day of getting the fire pump to work. It had been sat in salt water and was covered in corrosion and unfortunately not starting. I cleaned up the pump, which took about 3 hours; luckily, the sun was out.

Whilst cleaning, a thick smell filled the air. Jerry told me to go back inside, as the smell was ammonia coming from a fishing boat about 50 ft. upwind.

When it passed I then tried to get the pump started. It was seized. I took off the starter rope and that was working fine – Jerry came along to help. We managed to free the shaft and got it all turning again after another 2 hours… We put it back together and tried again. It was no longer seized but was still not working.

A while later we called Simon out to have a look. He pulled the starter rope and it started straight away. This was not funny. We let it run and then put it back into storage. I then assisted Simon with the fitting of the new refrigeration pump. This involved shutting off the salt-water intake. Whilst we were doing that, we decided to clean out the sea strainer.

Once opened we discovered it was full of crab larvae, which of course we emptied back into the ocean.

The crew from IRON LADY (GREY WOLF II’s sister ship) came round for dinner. A new bread maker had been bought as well as two types of flour. Simon and I made a loaf using the two different kinds. I think mine was better. 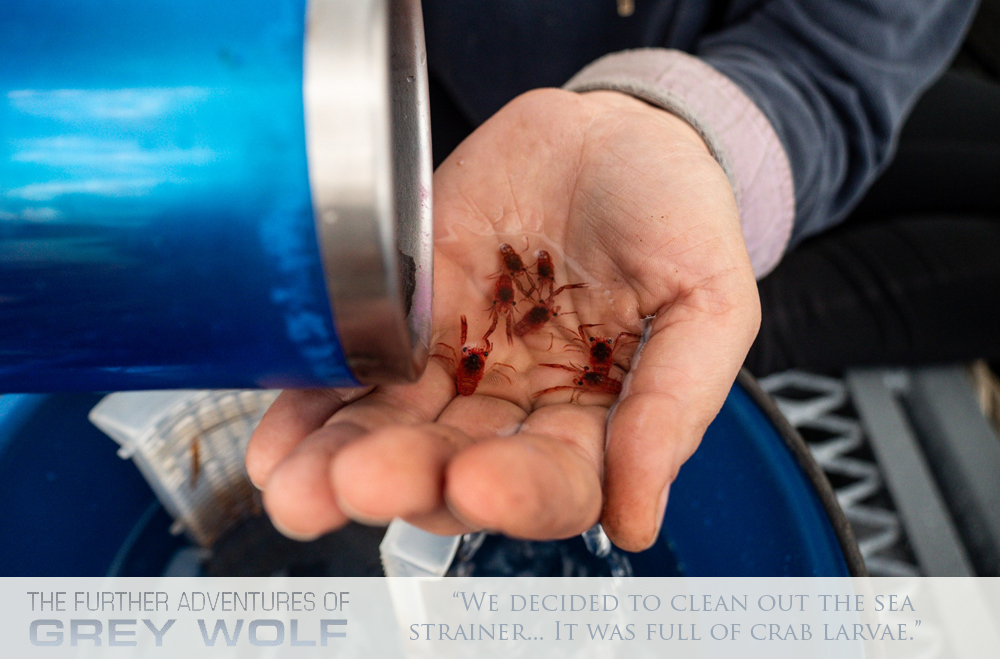 We woke up, had breakfast and were ready to start the day. Evie, Peter, Matt and Jerry were going shopping for enough food and supplies to last them for three months, whilst Simon and I were starting the 2000-hour engine service.

We started with an oil change on both engines, as well as changing the oil filters and crankcase breather filters.

We then moved onto the water maker and replaced the charcoal and pH filter, whilst also flushing through the system. The plankton filter also needed a good clean.

The shopping group arrived back 7 hours later with truckloads of food and supplies as well as five blocked cards due to suspicious looking transactions.

We are currently getting the boat ready for departure to Puerto Williams, so the next few days will be prepping.

Simon and I are continuing the service on the engines. This included replacing impellors, replacing the zinc’s on the heat exchanger and cleaning out the cupronickel cores.

I cooked dinner this evening as chef was busy. Everyone seemed to enjoy the delights of bacon wrapped chicken in a garlic sauce.

Due to the rainy weather we decided to stay inside and continue the boat prep.

Some of the crew went out shopping for flour. They came back with at least 100kg as it is used a lot for making fresh bread.

When flour is stored for a long time small bugs called weevils arrive. A good way of stopping the spread is by freezing the flour to kill off any eggs, however there was not enough room in the freezer. Luckily, the boat next to us allowed us to use their walk in freezer to store the flour for a couple of days. We thanked them with a bottle of wine.

Me, Simon and Matt played a card game called *****. Simon won, but he obviously cheated.

The bad weather continued but we had to go shopping for more supplies.

We caught an Uber to the mall where we did a bit of personal shopping for more gear. We then walked up to the large supplies store, also known as ‘Jumbo’.

Here we bought all the freezer food ready for the trip. We managed to fill up a total of three trollies which consisted of meat and the last few bits of veg.

We had to call two Ubers back home due to the vast amount of shopping.

For dinner me, Simon, Matt and Evie went to the local mixed food truck and ordered the best smoothies.

We then ordered food which consisted of pizza fries, Mexican fries (both portions over 1kg of fries), burritos, tacos and plenty more.

We were so full we had to call an Uber for the 10min walk home!